A few summers ago I worked with a student to extract all the measures of relative risk (including odds ratios) listed in PubMed abstracts for the 1995, 2000, 2005 and 2010 years.  The idea was to determine if there is a trend–specifically, decline–in the magnitude of published relative risk over time.

We restricted our search to studies that reported relative risk greater than 1.00, so, our focus was on ‘risk factor’ studies, usually of the observational type (e.g., case-control and cohort epidemiology).  We also excluded studies reporting risk factors greater than 5.00. In total we ‘looked at’ (a computer program did the actual looking for us) almost 115000 studies that published measures of relative risk in their abstracts.  This figure summarizes our results: 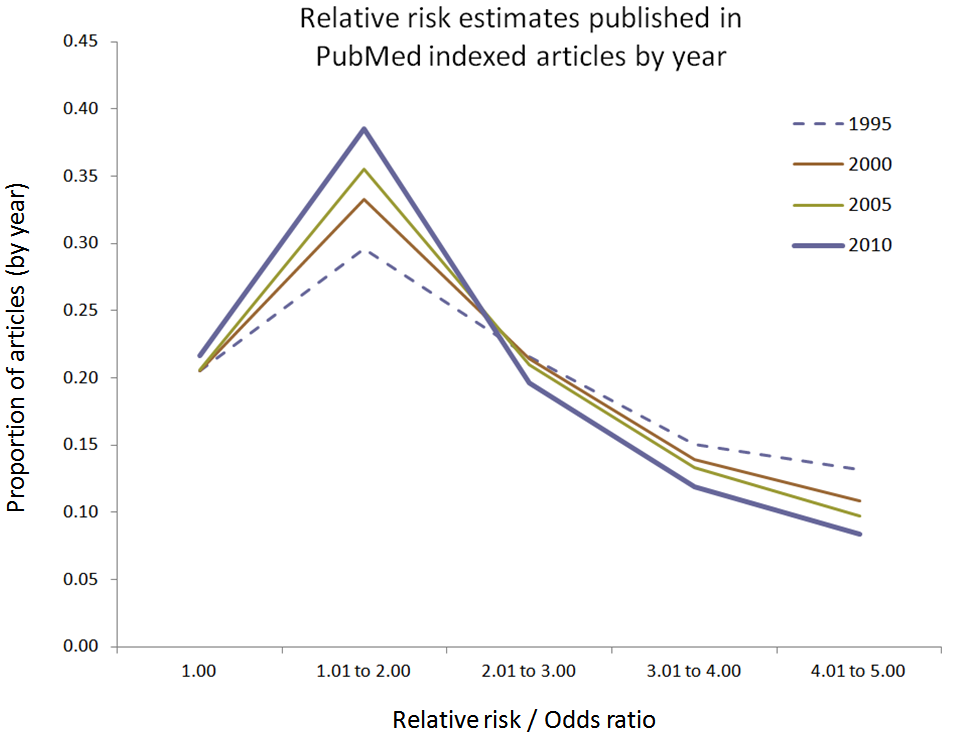 Each line is a time period, and the point estimates that comprise the lines are the proportion of studies by the class of relative risk (1, 1.01 – 2.00, 2.01 to 3.00 and so on).  Relative risk is an important metric in health research, and particularly epidemiology.  Put simply, a relative risk of 1 (or very near 1) suggest little to no association between risk factor and the outcome of study (illness, disease, etc.).  As the measure gets further from 1, the association between risk factor and health outcome gets stronger.

There are many possible explanations for this trend, some which seem very unlikely–like a publication bias towards weaker effect sizes–but this analysis is too cursory to draw any serious conclusions.  My favoured interpretations are that 1) as the science gets better researchers discover that risk factors weren’t as risky as they first thought and 2) the most harmful risk factors have already been studied, so new research is forced to focus on increasingly less dangerous stuff.