One easy (and not uncommon) mistake in data analysis is to calculate a statistic from a statistic without considering statistical weighting.  For illustration purposes, consider the following example.

Say I have data on neighbourhood income and population for a small city.  The table of data look like this: 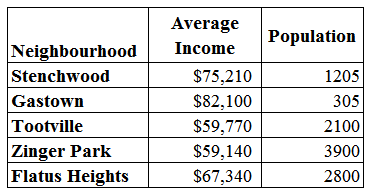 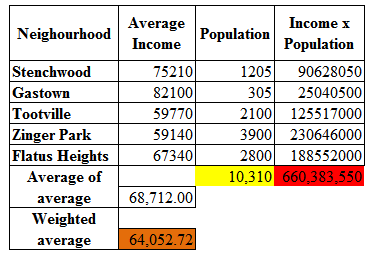 Weights are common in statistical data analysis, and their role is usually to adust a statistic based on the information it contains.  In this example it’s pretty straightforward.  None of this is rocket science, but taking an unweighted average of average (or average of proportions, or average of any statistic) is done all the time.  I see it in academic work, public reports and newspaper articles.  It’s an easy mistake to make with a (usually) easy fix.