I present here a simple idea for breaking down how I typically plan out courses.

I have three considerations: time (T), accessibility (A) and rigour (R).  Accessibility is the breadth of audience that I reach; basically, the number of students who will get value from a lecture or class.  Rigour is the completeness of the material.  Time is the time available to teach.

With this in mind, I propose the following.

1. Time is proportional to the product of accessibility and rigour (T = A*R)

2. Accessibility is proportional to time divided by rigour (A = T/R)

The idea here is that if infinite time were available, it would be possible to teach any student anything with as much rigour as required.

3. Rigour is proportional to time divided by accessibility (R = T/A)

For a fixed period of time, any increase in accessibility will reduce rigour.

With this in mind, we get the following visual model to help understand the relationship: 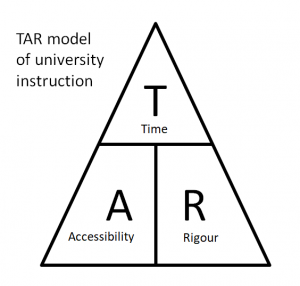 As a university professor I have some control over time, but not much.  I do have control over accessibility and rigour.  For courses in which I know the material must remain accessible to a broad audience, I generally have to lower rigour.   If a course needs to be rigorous, then I expect accessibility to decline.

While I have little control over in classroom time, I have discovered that online tools can be useful for increasing the time of instruction.  Using readings, online quizzes, and video content, I can increase content without requiring more class time.  I use this extra time to delve into details I can’t cover in class–and add rigour.

This is all obvious to experienced instructors, however, my treatment here is a bit more rigorous than what one typically sees in discussions of teaching strategies.  Which, unfortunately, means I very likely lost your attention several paragraphs ago.

How much does it cost to publish research?  Obviously this varies considerably across disicpline, but I did a little comparison across a non-random selection of Canadian universities.  The sources of data include Web of Science publication count, Web of science count of highly cited papers and funding data from this source.

Once I combined these data, I came up with this file.

The data include research fund and paper publication totals by year and institution.  Arguably research funds are used to do things other than fund the publication of research–like training graduate students–but this is a rough starting point. Furthermore, published research is a key metric of measuring research output for a university, and at the very least, is probably a good proxy for research output more generally, especially in comparisons over time and between universities.

These data tell us a few interesting things.  First, research productivity is trending upwards.  Click on the figure below to see a larger version of the trends over time.

Second, universities receive funding in the neighbourhood of $50,000 and $100,000 per Web of Science paper.  This is probably an over-estimate of the per-paper research costs since many papers published do not end up in the Web of Science system.  Perhaps the real number is half this value–say between $25,000 and $50,000 per paper, but this gives us a basis for comparison.

Third, across Canadian universities in this sample, there is some noteworthy variation. Averaged over the period of time I used in this sample, funding per paper varies beween 61K and 89K. 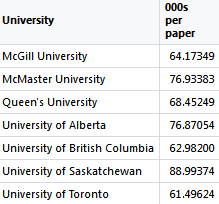 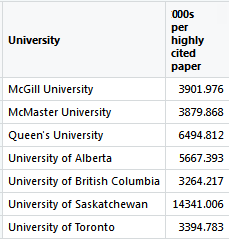 The good news (depending on your perspective, I suppose) is that the expenditure per paper published is trending downwards.

All Web of Science papers

Between 2008 and 2016, most institutions in this sample see an improvement of publication efficiency in terms of overall numbers, mainly because of an increase in the number of papers published with a stable (or slightly declining) funding level.  Similarly, we seem to be getting more research ‘bang’ today when measured by highly cited publications as well.  Note the variation for the University of Saskatchewan; this is largely due to the small numbers involved.

Only highly cited papers in Web of Science

What does this all mean?  Well, we know, at least within an order of magnitude, how much we should expect to pay for publications, on average.  This certainly varies by discipline, but it gives us a ballpark for comparisons across research intensive universities.  If you can get one paper out for $10,000 or less, then you are probably doing well in most fields.  If it costs more than $100,000, then you probably have a lot of research overhead–in lab equipment, staff, etc.  Some universities seem to spend more–like the Unviersity of Saskatchewan–and some spend less–like the Unviersity of Toronto.  This makes sense given the location of these institutions; the University of Saskatchewan is more isolated geographically, and is the lone research intensive university in Saskatchewan (sorry, Regina).  Toronto is a large institution surrounded by other universities, and at the centre of economic activity in Canada.  This probably allows it to leverage a mix of resources that increases it’s efficiency at publication.

Second, between 2008 and 2016, research funding in Canada did not radically change, but cost per paper went down.  This is mostly because the number of papers and highly cited papers in Web of Science went up.  This could be a good sign; the universities in this sample managed to adapt to a stable (and slightly declining) research funding pot.