In their paper “The contribution of alcohol to serious car crash injuries”, Connor et al. show a fairly strong association between alcohol consumption and the odds of getting into a serious car accident.  Specifically, a person who consumes 2 or more drinks has 8 times the odds of getting into serious injury car crash in the following 6 hours when compared to a person who has not consumed alcohol.  This is pretty intuitive, and the study seems fairly well done.

But there’s something strange going on…

One dimension of the findings that is curious (though not really discussed by the authors of the study) is that being a frequent drinker (e.g.,drinking 6-7 days a week) seems somewhat protective against the odds of getting into serious injury car crash.  The following table from their paper is illustrative: 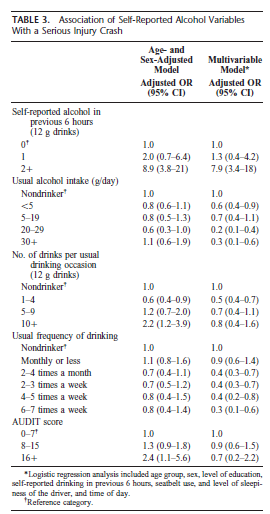 Compared to nondrinkers, persons who drink 6-7 days a week have a 0.3 times odds of being experiencing a serious car injury.  This is roughly the equivalent of saying that frequent drinkers have ~ 70% reduction in the probability of getting into a serious car accident after controlling for demographic factors and the consumption of alcohol in the last 6 hours.

The real question is what is the net effect of drinking in the last 6 hours on frequent drinkers and non-drinkers.  I can’t estimate this precisely based on the information presented in the study, but I can get a ballpark figure.

First, consider a simplified equation for the model they used:

I will estimate B0 as 0.001, and the value of B1 and B2 can be found by transforming the odds ratios in the table.  Using these inputs, I can derive model predicted log odds, convert these into probabilities, and then plot them on a graph: 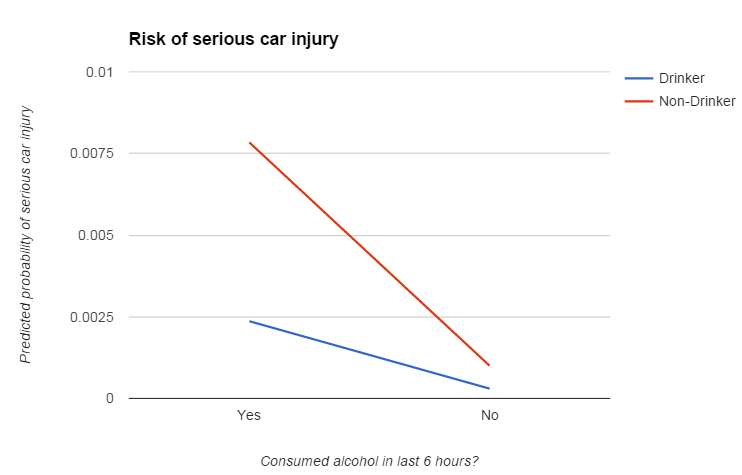 This graph says two things.  First, drinking increases the risk of car accidents, whether or not you are a frequent drinker.  Second (and perhaps more controversially), frequent drinkers who drink are at relatively lower risk of getting injured in a serious car accident when compared to non-drinkers who drink.  Of course, since non-drinkers drink infrequently (or perhaps never if their name means anything), the total public health impact of frequent drinkers is probably greater than non-drinkers.  Nonetheless, these results could suggest that drinking and driving may be a particular concern among persons who are inexperienced as drinkers–perhaps due to lower alcohol tolerance, or less experience in judging their level of impairment.

There are a number of important caveats to consider here–including the fact that I do not have access to the original data.  However, the results are not entirely unbelievable either; it seems plausible that all else being equal a frequently drinker may be less impaired by a small quantity of alcohol than an inexperienced drinker.  This doesn’t mean drinking alcohol and operating a motor-vehicle is safe–it clearly isn’t–but just that the risks are complex.