Scientists may soon identify a clear connection between Zika and microcephaly, but I want to assess the publicly available data to determine whether or not it lends support to the Zika-microcephaly theory.  My focus is on the epidemiology rather than the pathology, which means I am using data on the incidence of infection and microcephaly to determine whether or not there is a statistical association between the two.

Taken at face value, the data would suggest a very powerful association between Zika and microcephaly.  Here are the reported number of microcephaly cases in Brazil for 2014 & 2015

Assuming a constant birth rate between years, and that Zika appeared in 2015, that’s more than a 30 times difference in absolute risk between 2014 and 2015, and 4296 microcephaly cases attributable to infection with Zika virus. That’s stronger than the association between smoking and lung cancer.

Are the microcephaly data to be believed?

There is good reason to think that Brazil’s surveillance of congenital anomalies may not be particularly accurate. Based on work by Dolk (2010), the rate of microcephaly in Europe is 2.9 per 10,000 live births. If we assumed the same absolute risk for Brazil, we would expect almost 9,000 cases of microcephaly per year. Using the same math, there should be about 350 cases in Pernambuco State, the region of Brazil where much of the early concern was concentrated.  The most recent numbers I can find suggest as many as 1,500 cases of microcephaly in that region, though apparently many of these cases are not confirmed. 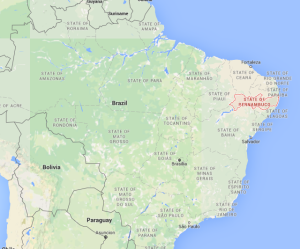 The discrepancy in cases is not surprising given the difficulty of diagnosing microcephaly, which at least initially, relies on measurements of head circumference against a population average, then followed up with brain imaging for confirmation.  In a paper recently published in The Lancet, the authors suggest that given the risks associated with diagnostic brain imaging used to confirm cases, it may be important to reduce the number of false-positive clinical diagnoses by changing the standards of measurement currently used.  This is particularly true given the potential stigma of diagnosis and absence of any specific treatment once a diagnosis is made.  In short, the evidence suggesting a recent spike in microcephaly is contested, and it may be some time before reliable data emerge.

Association between Zika incidence and microcephaly

If we were to assume the microcephaly data were representative, what is the connection between microcephaly and exposure to Zika?

Around 71,000 (2015-2016) Zika cases have been confirmed in Brazil as of February 2016.  However, like other flaviviruses, Zika may often be sub-clinical, so let’s multiply this number by 10, giving us 710,000 infections in Brazil over this period.  I estimate that the prevalence of pregnancy in Brazil is roughly equal to the birth rate (15 per 1000) which means that around 10,650 of these 710,000 infected people were pregnant women. The current concern is exposure in the first trimester, but to be conservative, I’ll just divide 10,065 by two, which gives us 5,325 women exposed to Zika at a time that would increase risk of microcephaly.

Now, if the difference in incidence between 2014 and 2015 is to be believed, then that means 4,296 cases of microcephaly among these 5,325 women would be explained by Zika, which gives an Zika incidence rate of 0.81, meaning that 81% of pregnant women exposed to the Zika virus will have a child diagnosed with microcephaly. To put this in context, pregnant women standing within 1200 metres of the atomic explosion at Hiroshima had 55% chance of giving birth to a child with microcephaly (Plummer 1952). The incidence rate ratio of Zika exposed mothers to baseline rates of microcephaly (0.81 divided by 0.00029) is over 250, which is as strong a causal association as you will find.

Based on these data, the causal relationship between Zika and microcephaly is so striking as to be implausible.  After all, Zika has appeared in human populations before without evidence of microcephaly; if the association between cause and effect was as clear as the evidence here suggests, the association would have been seen before.

It is hard to find reliable data that would help determine whether or not there are more microcephaly cases in Brazil in recent years than in years prior to the discovery of the ZIka virus in the western hemisphere.  So to some degree, the answer to the question I posed in the title remains unclear.  Under these circumstances, the public health response may be entirely appropriate; when uncertain, it is often wise to play it safe.

Nevertheless, the number of Brazilian microcephaly cases being used by news sources and social media are probably not accurate enough to deserve reporting without considerable qualification, and certainly should not be used as primary evidence demonstrating the relationship between Zika and microcephaly.  There is good reason to think that awareness and fear of disease can cause apparent (but imprecise and/or inaccurate) trends in disease to emerge from time to time.  Back in 2006 my colleagues and I observed this very problem with estimating incidence of West Nile virus following the pathogen’s emergence in Western Canada.