Regionalization problems involve grouping geographical objects (often ‘zones’) into discrete or fussy spatial groups.  There are examples in many disciplines:

Solving regionalization problems can be a challenge because they often must consider multiple (at times competing) objectives simultaneously.  For example, political districts must have equal populations, but often must also include communities of people with similar political interests.  For this reason, many use multi-criteria optimization techniques where a large number of considerations can be used to calibrate an algorithm to solve a specific regionalization problem.  In political districting, it could look something like this:

For all but the smallest data sets, this problem is too complex to solve properly without a computer.  Yet incorporating these criteria into a single decision making tool is not trivial.  A number of researchers have implemented these tools over the years, including several specifically for political districting, for example:

We have implement our own general purpose regionalization tool that can be used to solve a variety of different optimization problems, including health regionalization, school catchment design, political districting and ecological zoning.  The tool is a simple multi-criteria algorithm that uses a tabu list to escape local optima while searching for good regionalization plans.  These are some features of Tabreg at present

We can easily use Tabreg to create groups based on maximizing or minimizing an attribute within groups.  This examples uses income data from the 2006 Canadian Census 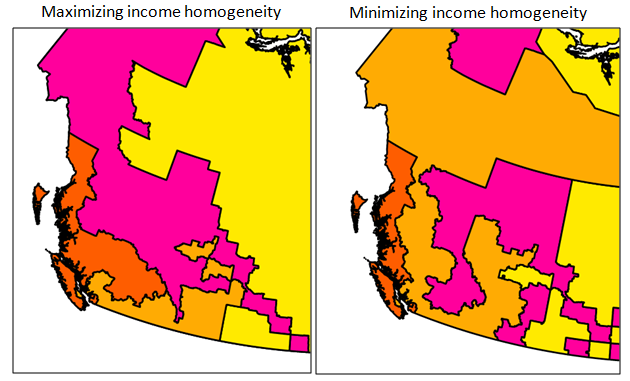 Here we are redrawing political boundaries in an analysis of the most recent Federal redistricting plan. 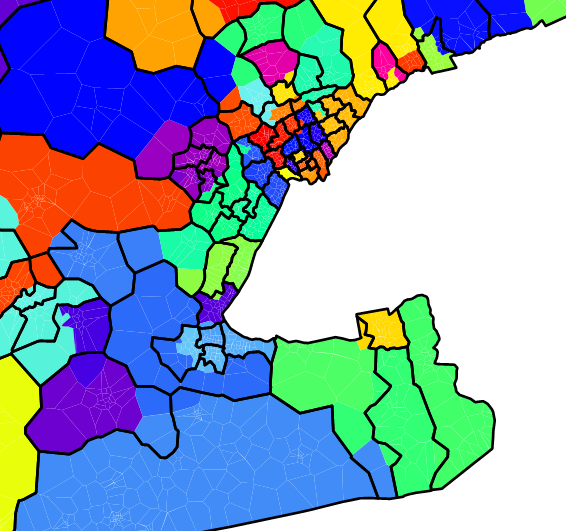 While a public (and open) release of our tool is expected in the next year, if you would like to use the tool, send me an email, and I will provide you the code as is.  All Tabreg users are asked to include this citation in any publications: