I have long wondered about the future of the Olympic sprint.  Specifically, at what point will athletes reach the limits of human ability where basically we simply can’t run much faster. If that day ever comes, race finish times will be more or less identical, and winners will have to be identified using photographs at the race line.  If that ever does happen, I suspect that the event may lose some of our fascination.

I went to an online repository of Olympic data (http://www.databaseolympics.com) from the first Olympics until 2008 and did a little analysis, basically modelling the average race result times of medal winners by Olympic year.  The data and R code can be downloaded for your own use.  My intent was to model the shape of the historical trajectory of race results, stratified by sex, to see whether or not there is an inflection point.

The model suggests that race times improved greatly since the first Olympics, but that the rate has slowed the last 30 years, especially for men.  The figure below shows the model predicted race times by year for women and men.  I use the predicted values because the model has an R-squared value over 0.90, suggesting that most variation over time is ‘explained’ by the model, and predicted values are easier to interpret than the observed data.  Predictions are based on a model that only includes statistically significant regression coefficients. 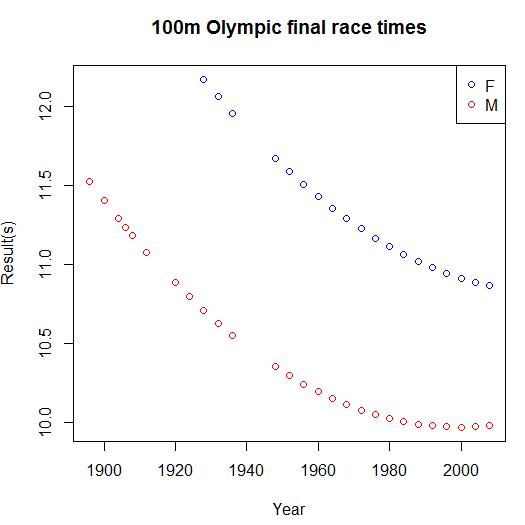 If this pattern is predictive of the future, we can expect men’s race times to change little going forward; it seems that for men the natural speed limit lies in the 9.6 to 9.8 second range.  It could be that few people will ever be capable of running times in that range, so the races will always be dramatic contests between the uniquely speedy.  However, world records probably won’t change as much as they did in the past unless officials keep adding digits to the time clock.

For women, there seems to still be room for improvement, as the race results up to 2008 have not flattened out.  Perhaps women could still shave of a quarter of a second from race times, or perhaps even more than that.  Could this mean that women sprinters may one day catch men (literally and figuratively)?  It’s possible, but assuming that the rate of improvement remains the same, it would probably take a couple hundred years.