The 2015 Canadian Federal election is over, and the results seemed a surprise to many. In the days just before the election, some sources predicted the Liberal majority (like Mainstreet polling), and some polling firms (like Nanos) came very close on the popular vote nationally.

In 2011 many federal pollsters were wrong, but seat projections assuming correct polling numbers were pretty good.  In other words, if the regional polls had been accurate in 2011, then the seat count prediction would have been very close to the election result.  This time around the polls predicted popular support (even regionally), but few analysts predicted the Liberal majority, and those who did waited to make their predictions until the last minute. 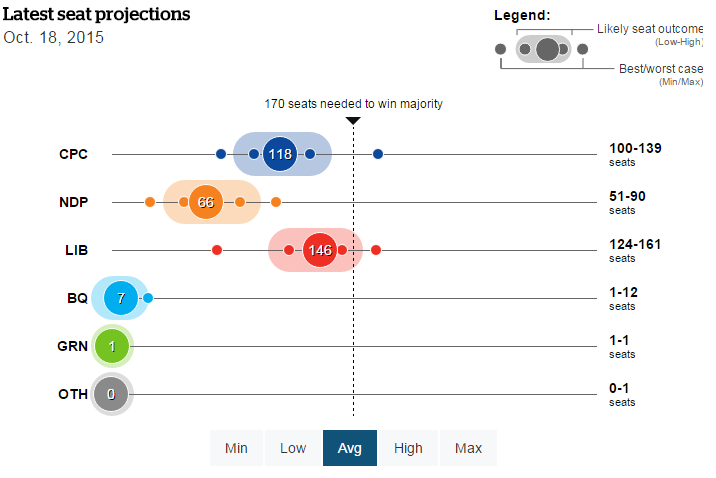 Seat projections from the CBC

To his credit, Grenier did predict a Liberal victory, but considered 184 as a long-shot; his maximum seat projection for the Liberals was 185, but his best prediction was 146 seats.

The task of predicting an election outcome is, like many predictions of human systems, very hard, particularly in the weeks or months before an election.  It’s hard for many reasons.  For one, the data (stated preferences in regional samples) are not a perfect representation of behaviour on election day.  Many people change their minds moment-to-moment, influenced by new information, personal experiences, and gut feelings that can emerge spontaneously throughout a campaign period.  In addition, it’s hard to get representative samples of voters from polls.  Different polling methods can produce different results, and we are far from understanding the full effect of new technologies on voting behaviour.

Perhaps the greatest challenge to predicting election outcomes is that that the very publicizing of information used to predict elections may itself affect election results.  In this election it seemed that once a few polls in early October started to favour the Liberals over the NDP, the support for the NDP collapsed.  The electorate wanted change, but may have waited until very late in the campaign to decide where to put the ‘change’ vote.  For many people it seems that their final voting choice was dependent on polling information late in the campaign.  One can’t help but wonder if the NDP were reported to have polling momentum a few weeks ago if the snowballing of anti-conservative support might have rolled in their favour.

If predictions of results can influence future results, it means that predictions of election results may be inaccurate the instant they are made (particularly when made long before voting day), but could still be an important tool in strategic voting.  It makes for a complex dynamic of information dependence–where current polling (and or voting) may be dependent on the public dissemination of prior polling information.  Predicting final vote results in the face of such dependence is difficult, and perhaps even impossible.  Yet more evidence that the social sciences are hard.  That’s what makes them interesting.