There is a fairly uncontroversial relationship between wealth and most measures of health.  The explanations for it are not simple, but the relationship looks like this: 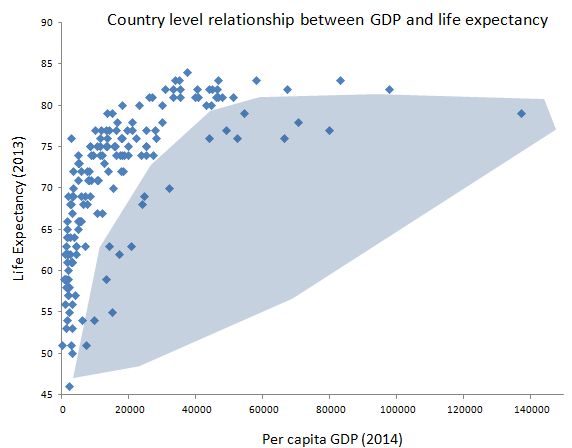 As can be seen here, as wealth (measured as gross domestic product per capital) goes up, life expectancy goes up.  However the relationship is not linear; the benefits of wealth are mostly achieved at the median of global per-capital GDP, around 15-20000 USD.  Wealth gains above this level deliver a diminishing return on health, if any overall benefit at all. This general relationship has been observed and commented on for decades (it’s sometimes called the ‘Preston curve’), and seems to be trending slightly upwards over time.  The shape of the curve looks roughly the same whether or you’re measuring life expectancy, infant mortality, maternal mortality or a number of other health measures.  While health is not the only important outcome of economies, it does speak, at least somewhat, to the ability of an economy to return value to its citizens.

Countries in the shaded blue area are under performing–that is, should have higher life expectancy than they do based on their economic productivity.  These countries are producing wealth that is not producing the same health benefits that equivalent wealth is producing in other countries. 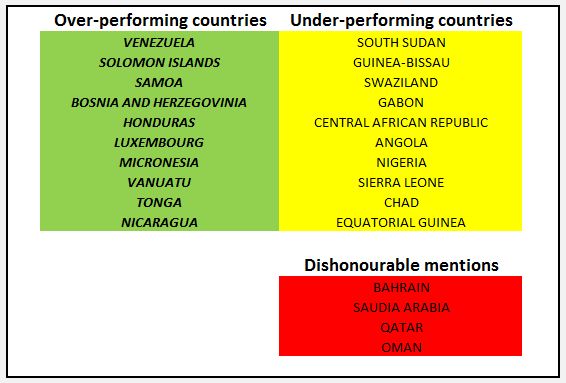 The economic productivity of the green countries returns the most to the citizens on a per dollar basis, and the yellow countries return the least.  Of the green countries, only Luxembourg is in the class of what we’d typically think of as wealthy, and it (as well as several other countries on the green list) is probably too small to offer substantive insight about how to improve HROI generally.  Most of the yellow countries are very poor, and struck by a mixture of political, economic and social instability that interfere with the building and maintaining of health infrastructure.

The red countries have low HROI and rank in a similar range as the yellow countries, but also happen to be obnoxiously wealthy, making their failure to perform on health particularly problematic. These four countries produce considerable wealth (almost entirely from oil exports) but this wealth is not returning as much to the population as the wealth of other countries around the world.  Particularly noteworthy is the contrast between Venezuela and the red countries; for all of Venezuela’s challenges (of which there are a great many) at least for now, the HROI is considerably better than its OPEC contemporaries.

Measuring health return on investment in this manner doesn’t answer many questions, but does provoke a few.  For example, why are Central and South American countries performing (relatively) well in terms of HROI?  How can resource wealth be better used to raise the living standards and health outcomes of the poorest citizens of the world?  Why are some oil-rich states laggards in the effectiveness of translating wealth into overall population health?